Air pollution across the globe is by many standards a serious problem and is causing a number of people across the world to suffer very poor health at best and at worst an early death, it has been estimated that some 3 million people are dying prematurely, each year, due to this increasing problem. These are not good times.

1.Air pollution is a major environmental risk to health. By reducing air pollution levels, countries can reduce the burden of disease from stroke, heart disease, lung cancer, and both chronic and acute respiratory diseases, including asthma.
2,The lower the levels of air pollution, the better the cardiovascular and respiratory health of the population will be, both long- and short-term.
3. In 2014, 92% of the world population was living in places where the WHO air quality guidelines levels were not met.
4. Ambient (outdoor air pollution) in both cities and rural areas was estimated to cause 3 million premature deaths worldwide in 2012. 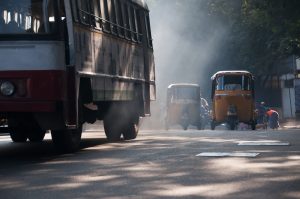 The situation in India
10 out of the top 20 most polluted cities in the world today are in India (Daily Telegraph 26th January 2017). Some progress is being made in fighting this growing problem. All new vehicles manufactured and sold nationwide in India will need to be compliant, by April of this year, to Bharat level IV (equivalent to Euro 4 standard in Europe). The next stage in compliancy, Bharat V, has now been scrapped in favour of bringing forward Bharat VI which is now to be introduced in April 2020. This, in our opinion, still leaves a very serious and growing problem over the next 10 to 15 years. Between now and April 2020 some 10 million (passenger cars, trucks, buses) or more, vehicles will be registered to ply the streets of India. These additional vehicles will be compliant to the Bharat IV standard and are likely to be around at least until 2030 still producing very high levels of noxious emissions (relative to Bharat VI standards). There are some 25million passenger cars, trucks and buses which are currently adding to the problems of air pollution, so to add a further 40% to this number (by 2020) can only mean the situation with air pollution is going to get much worse. It should also be noted that the new Bharat VI compliant vehicles will still be adding to the problem from 2020 onwards, albeit in a reduced way but nonetheless there will be millions more of these between 2020 and 2030 and as with most developing countries the life cycle of any vehicle will be taken to its extreme. Developing countries in most areas of the world will face a similar, but not as daunting, challenge as those faced by the Government and people of India in there efforts to deal with this global epidemic.

Action needs to be taken now to mitigate the effects of noxious emissions from vehicles and we believe this action should see the use of retrofit technology in the vanguard. We have yet to see or hear any politician or expert suggest this approach. We are not advocating the use of emission control devices such as diesel particulate filters which are a more sophisticated form of ‘brush and shovel’ and do not offer the consumer any potential for payback on investment. No, we are advocating the use of retrofit technology which will not only reduce emissions to very low levels but also provide significant reductions in fuel consumption and a payback for the consumer. This action has more political acceptability as it promotes a win-win scenario. Retrofitting of older vehicles clearly has many advantages not least in reducing pollution levels but providing better health and welfare for people much earlier than previously planned. We believe our suggestions offer a valid and early intervention but what do you think about this very serious challenge?